If you are north bound on Auburn Way North, a main thoroughfare in Auburn, south King County, Washington, and stop for a traffic light, you may glimpse a small cemetery to your right at 8th Street NE.  This is the Auburn Pioneer Cemetery, on land donated for that purpose in 1878.

"The marker commemorating the Auburn Pioneer Cemetery’s only Civil War veteran is disappointingly vague. It includes no dates, neither birth nor death. The soldier’s name is included, but in abbreviated form. And to add insult to injury, the sparse information that is displayed has been mis-transcribed and published incorrectly on several online genealogy sites. Fortunately, the stone does include the fact that Mr. Hopkins served in Company B of the 1st Wisconsin Cavalry—and that single fact was enough information to discover much of his life story."1

Recently the cemetery and the marker for Madison P. Hopkins came to our attention when his great-grandson, Ron Sailer, joined one of our virtual meetings.  He gave us a brief synopsis of Madison and the fact that he had been murdered here in Slaughter, the early name for Auburn.  There is an extensive biography of Madison's family and military life at  http://www.auburnpioneercemetery.net/ .

Story of a Murder Victim

In about 2008, the biographer, Kristy Lommen, showed extensive research especially into Madison's death November 29, 1883 when he was murdered.  She told us of the difficulties in finding newspaper articles for that time period.  She finally found, at the Tacoma Library, microfilm of The Washington Standard, a newspaper from Olympia.

Shortly after posting her biography on the cemetery website, Kristy made contact with Ron Sailer who shared his collection of clippings from the Bellingham Herald and Seattle Chronicle.  The clippings had been meticulously saved by Martha Rogers Hopkins, Madison's widow, and their descendants.  It gave all the details as listed in the newspapers of the day and the story makes for very interesting reading.

It's now 12 or 13 years later and much more information is available online.

Newspapers can be a gold mine

Searching at  https://chroniclingamerica.loc.gov/   brought up several stories in the Seattle Daily Post Intelligencer beginning December 1, 1883.  Many of the articles are too long to include here.

This shows the progress being made in online newspaper research.  Keep checking back for new details on that story you've been researching.

Thank you to Kristy Lommen and Ron Sailer for bringing this story to our attention and giving permission to use it on our site. 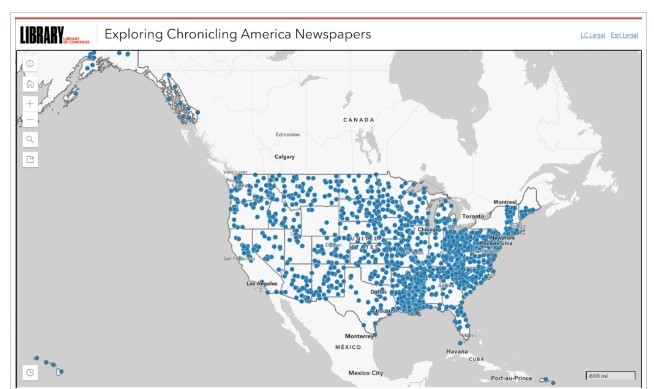 Screenshot shows the default view of the new "Exploring Chronicling America Newspapers" interactive map and timeline [1] Somehow this week I received a copy of the Library of Congress blog, The Signal, in which I found the news about this new feature at Chronicling America. I had not subscribed to this blog before but I certainly will now!  Perhaps you might find it useful as well:    https://blogs.loc.gov/thesignal/ Interactive Map and Timeline This interactive map of newspapers in the Chronicling America digital library will be a tremendous help in finding the newspapers in your neck of the woods.  Just click on a dot near the area in which you are searching and you get a pop-up with the name of the town and newspapers published in that area.  Neat! Clicking on the underlined text will take you directly to the issues where you may browse or, with the title of the available newspapers, you can do a search by name or phrase.  Not all states are included; this is a work in pro
Read more

Genealogists: Use your Google Drive!

Why?  Google Drive is free, and available on all of your devices. And you probably already have a Drive and don't know it! I use mine constantly. Why should you use it? For saving from anywhere, and sharing with anyone. Share source images you've found with cousins, share your own documents with others for feedback, and share things with yourself on other devices. You can do this no matter where images or documents come from or what software created them. If you prefer Word to Google Docs but want to be able to get inline comments, just import them to your Drive. Do the same for Excel, or any other software. You can even save to and share from your Drive from your phone or tablet. Don't worry, you can edit and then download in Word or Excel format. Where's My Google Drive? First, how do you find your Drive? Go to Google.com and look up to the right. If you are logged in and have uploaded an image you will see it right next to the matrix of stacked dots. Top right of th
Read more

The Power of One Little Detail 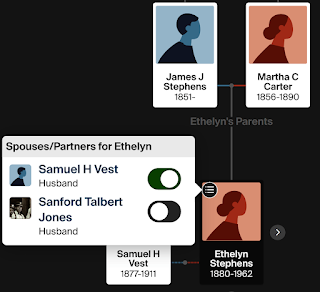 Which family would you rather see on your tree?  This? Ethelyn Stephens Jones & her parents Or this. Ethelyn, parents, husband, sisters and their husbands I wanted the whole family. But a fter extensive searching in Ancestry.com, MyHeritage.com, FamilySearch.org and elsewhere, I had almost given up on having anything more than names and estimated dates for Ethelyn's parents, no records beyond her death certificate connecting them, or any other birth family. In other words, settling for the first image. Then FamilySearch found the death certificate, which gave her exact date and place of birth along with the full names of her parents. Of course immediately I added the parent names and other information on both trees, Ancestry and FamilySearch Family Tree (FSFT). Birth and family information on death certificates is secondary information, and not always reliable. Still, names are clues, and the birthplace in the death certificate was close to what she stated in her marriage lic
Read more