In December 2018, the Greater Kent Historical Society (GKHS) will proudly mark their 25th anniversary!  There had been an “Old-Timers” group in Kent, WA, for many years, and it is still going strong with an annual awards event.  During a meeting in 1992, Rae Reitan, a native of Kent and the City Historian, suggested that Kent should have a legitimate Historical Society.  The idea was adopted, a committee was formed, and a campaign was held to collect artifacts and information about Kent and the surrounding area.  The Greater Kent Historical Society was formed and incorporated as a 501(c) (3) non-profit organization.  The next year a space at 209 W. Meeker in historic downtown Kent became the temporary home of the society and it’s collection for the next five years.  I remember well my visits to that small space with it’s artifacts and excellent exhibits.

Interest in a larger space eventually settled on the historic Bereiter home on Smith Street across from Mill Creek Canyon Earthworks Park.  The Society successfully lobbied the City of Kent, and in 1996 the house was purchased by the City to be the home of the GKHS and a house museum open to the public.  The City and the Museum have continued their cooperative relationship throughout the years, with the City providing funding support for a Museum staff person, and handling many major repairs and maintenance for the house.

The Bereiter House has an important place in the history of Kent and is the only historic house in Kent that is open to the public on a regular basis.  Built in 1908 by Emil Bereiter, the 3,500 sf house was built in the American Foursquare (or Box House) style, with extensive interior woodwork and a grand front porch. Bereiter was the owner of the Covington Lumber Company, and a mayor of Kent in 1912. Bereiter, his wife Bessie (Stewart), and their two sons Donald and Stewart, lived in the house only a few short years before he became ill and passed away a short time later.

Another important family to live at the house was the Saito family, who were successful members of the active Japanese-American community in Kent before they were interned during World War II.  They never returned to the house after the war.


The museum has many rooms that serve as exhibit space, including the living room, dining room, breakfast room and kitchen, and back porch and laundry room, all downstairs.  The offices of the GKHS occupy two downstairs rooms, including Emil Bereiter’s original office space and a library room.  There are several musical instruments in the living room, including a player piano, antique record player, and others.  Upstairs are the main bedroom, the children’s bedroom, the bathroom, the small sitting room over the front porch, and three exhibit rooms.  The house has been designated a City of Kent Landmark and it is well worth visiting!

In addition, outside there are display elements on the grounds of the Museum, including the Veterans Blue Star Memorial By-Way Marker, the Japanese-American Memorial called “Another Time, Another Place”, plaques recognizing the river landings in the Valley, and several farm implements.

The Museum is open Wednesday through Saturday 12:00 – 4:00 pm, or by appointment.  Their address is 855 E. Smith St. (parking at the rear of the house), email is kenthistoricalmuseum@gmail.com.  Their phone is (253) 854-4330.  Call ahead if you would like to do some research, or just drop in for a tour.  You can also learn more about the Museum and read their blog articles at http://gkhs.org/.

On Saturday, December 15, 2018, there will be a Holiday Open House that you could attend.  It will be from 12:00 to 4:00 pm, with the house decorated and treats to eat!  It’s always a fun time to drop in and explore the Museum. 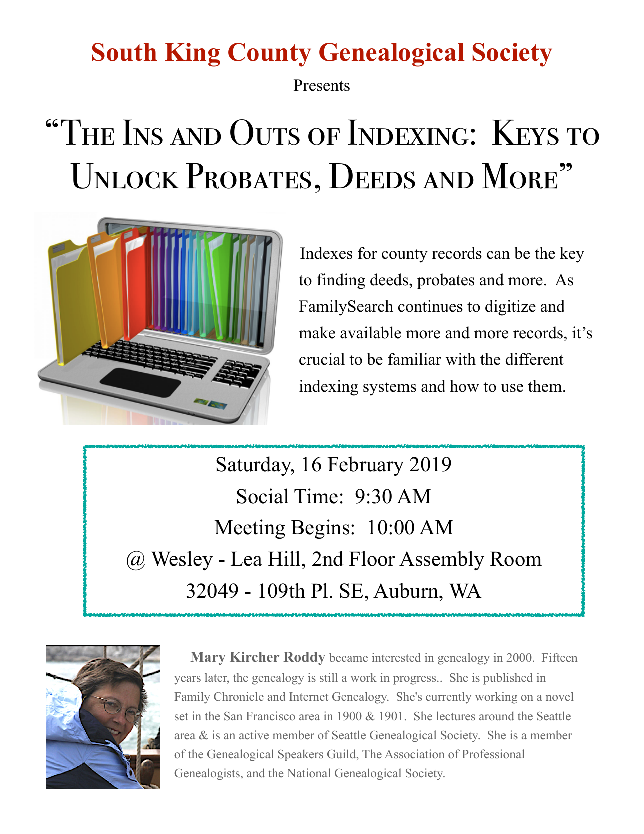 By Valorie Zimmerman
2018 was a great year for South King County Genealogical Society, and we anticipate 2019 will be even better. We began the year by launching our new website at http://skcgs.org. Our mail list at Rootsweb was down for awhile, but is back. Our Seminar was tremendous, and we're planning another for 2020.

We have had some great speakers at our regular meetings, we've placed for our formerly traveling library at the Kent Family History Center, have renewed our contract with the King County Library System to present our book collection to south King County at the Auburn Library, and have many thriving special interest groups. We had a very successful Intermediate Genealogy class following our 2018 meetings, taught by Winona Baird. Winona also began offering our Research Workshops in 2018. 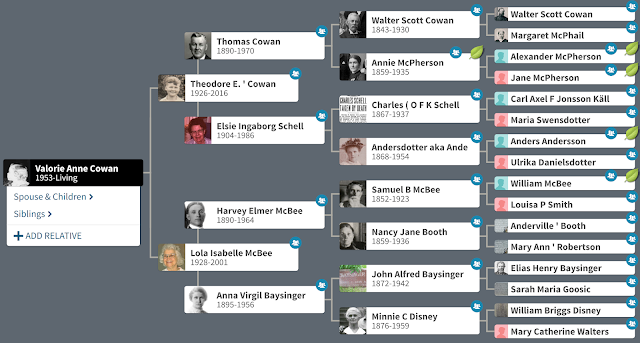 If you use Ancestry, and have done a DNA test there, you've heard about the shortcomings and the value of Thrulines. Recently I've been doing a drive to get all my Baysinger DNA matches actually onto my Ancestry tree, and properly tag them as DNA matches, and also tag each of their connections to our most recent common ancestor (MRCA). The match gets a DNA Match tree tag, each connecting ancestor gets a DNA Connection tag, up to the MRCA(s) which get a Common DNA Ancestor tag. When one does this on enough lines, in the pedigree view of the tree:


See all the DNA symbols? Isn't that cool!? The part that doesn't show here is the work of "building down" some or all of these lines. I'm happy to say that I've finished building down all lines from Elias Henry Baysinger, my two times great-grandfather, at least until the new DNA matches hit the database in January and February! I may have missed some descendants, and putting all the DNA matches into the tree …
Read more

by Joy Etienne, sole niece of an 8th AA radio operator
BAM.Fire in the empty bomb bay.BANG.The B-24 nose turret explosion. Chaos high above Oise still enjoying the painterly French summer light made famous by Vincent Van Gogh in another era. Black, molten flak lacerates the shiny skin of the Ford-built Lib.  BOOM. The wings fly off. Thursday 7:35 pm  Sunon Square Dance goes down in flames.  The German 88 meter anti-aircraft canon in Cramoisy got the squadron leader.
My 4F uncle, Tech Sgt John Harold Leahy, who went by Bill, the radio gunner in the bomb bay, grabbed the fire extinguisher before passing out.